Will Ayla be found this hunting season? 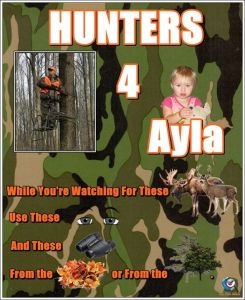 Remember our Hunters for Ayla project back in 2012? At first while I was hopeful, I had doubts that Ayla was on land. As the days went on I became more hopeful that if not Ayla, at least something might be found that would help lead to Ayla’s location or help with the investigation. We were all disappointed when the season ended and we were no closer to finding Ayla. After two more years of deer hunting season we still don’t know where she is but maybe this year will be different.

People don’t always hunt in the same place every year so it’s possible a hunter could go to an area that hasn’t been hunted since Ayla went missing. Ben brought up cases in Maine where a person was found years after they went missing so just because it’s been almost four years, it doesn’t mean a hunter can’t find her this year.

There is a long history of hunters in Maine recovering missing persons and finding clues to crimes.

In September 2009, a bow hunter found a woman’s body at a wildlife refuge in Saco.

In 2006, a hunter in Canaan found evidence connected to the disappearance of 38-year-old Cheryl Murdoch — a bloody tarp near the scene of her murder.

In November 2000, a hunter found the body of a man who had hung himself from a tree in Saco.

Even McCausland was hopeful the hunters could help.

McCausland said he hopes they’ll lend a hand in this case.

“In past cases of missing persons, we have always encouraged hunters to keep an eye out,” he said. “Hunters are keenly observant as they’re looking for deer. If there’s anything that they might think is of interest or related to this case, we certainly encourage them to call us.”

What do you think? Will Ayla be found this hunting season? 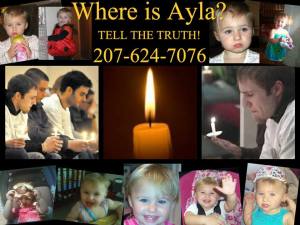 Posted by mountain mama on October 22, 2015 in Uncategorized